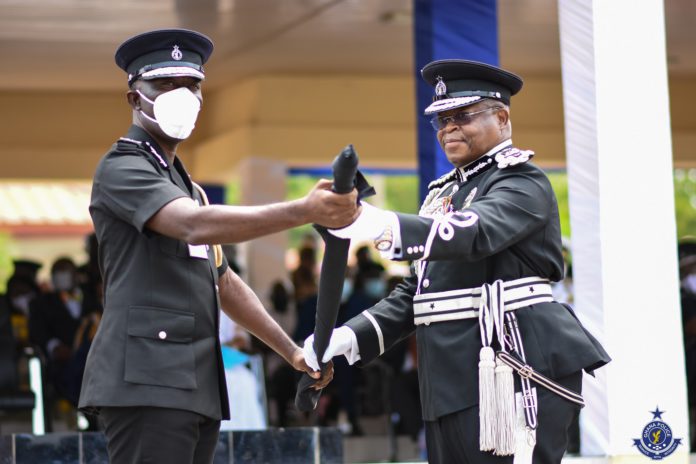 The Ghana Police Service has said goodbye to the Inspector-General of Police (IGP), James Oppong-Boanuh as he proceeds on retirement.

This was in a colourful ceremony at the National Police Training School in Accra on Friday, July 30, 2021.

Mr Oppong-Boanuh was ‘pulled out’ from the Ghana Police Service as a serving member after a parade was held in his honour.

He proceeds on leave pending retirement on 7th October 2021, while Dr George Akuffo Dampare acts as the IGP.

The ceremony was graced by the Interior Minister, Ambrose Dery, the Greater Accra Regional Minister, Henry Quartey, among other high-profile personalities.

Mr Dery, as part of the celebration, presented a citation to Mr Oppong-Boanuh.

Mr Oppong-Boanuh, who was the Deputy IGP, was appointed to head the service in October 2019.

The Deputy IGP position, which is part of the Police Service Regulations under C.I. 76, had been vacant for many years until the police administration appointed COP Oppong-Boanuh who was then the Director-General of Administration to fill the position in September 2018.

COP Oppong-Boanuh, who had equally hit his retirement age, was granted an extension by President Nana Akufo-Addo in 2018 after he wrote to the Interior Ministry to ask for an extension of his service.