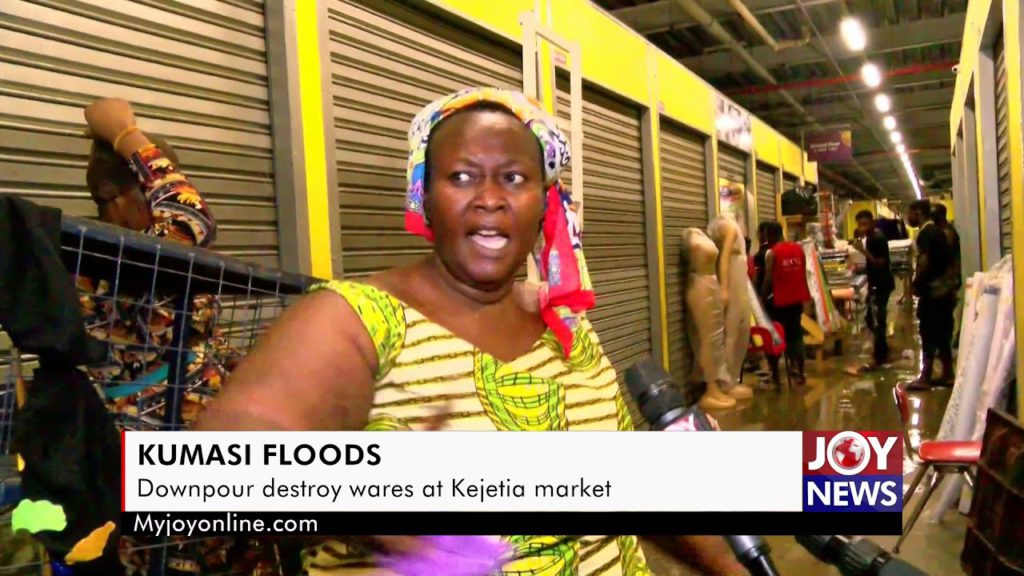 Property running into thousands of cedis have been destroyed by flood at the newly-built Kejetia Market at Kumasi in the Ashanti region.

This comes after two hours of rain which affected parts of the city. The Ashanti Regional capital has experienced two successive nights of heavy rains.

At the Kejetia market, shopkeepers made an effort to remove any remaining flood water from their stalls, after the water receded.

Some wares destroyed by the water are moved out, while some were being salvaged.

“Most of the fabrics I sell here are wet. An the nature of these products is such that, if it gets into contact with water, it brings about a lot of complications,” one trader told JoyNews while packing out what he could lay hands on.

The whole administration block of the market was also flooded with computers and other equipment in the command centre carried to higher ground to prevent damage.

This is the second time the market is experiencing such floods.

The environs of the market including the central business district of Adum also got flooded.

Other areas in the city were submerged by the flood, including Anloga Junction, Dagomba Line, KNUST and Airport Roundabout.

At Santasi Kokoben and Buokrom, it took hours for the rain to recede to allow flow of vehicular traffic.

Officials of the National Disaster Management Organisation (NADMO) were present the market to assess the extent of damage.

No casualty was recorded at the facility. However, heavy rains have so far claimed 3 lives in the Ashanti Region over the past two months.

The latest is a two-year-old boy who was carried away by the running water at Sawaba, and later found dead.