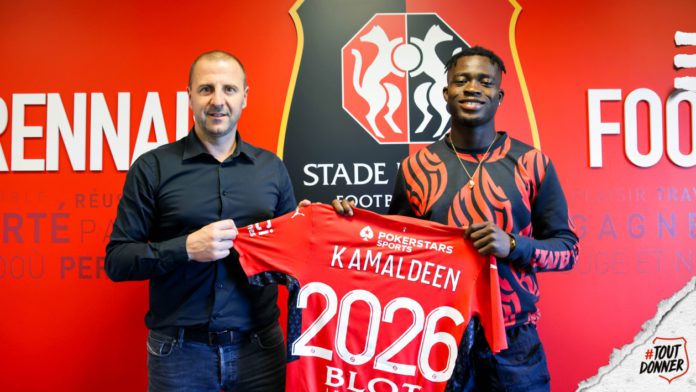 Ghanaian winger Kamaldeen Sulemana has completed a move to Ligue 1 side Stade Rennais on a five-year deal.

Rennais saw off competition from Ajax, Manchester United, Nice and a host of other European clubs.

“Stade Rennais FC is pleased to welcome the young Ghanaian international Kamaldeen Sulemana from FC Nordsjælland. Author of 10 goals and 8 assists in the Danish league last season, he signed a 5-year contract with the Rouge et Noir,” a club statement reads.

“Convinced of the Rennes project, Kamaldeen Sulemana is the fourth Ghanaian to join the SRFC after John Mensah, Asamoah Gyan and John Boye.”

Sulemana, who is a graduate of Right to Dream Academy, spent the last two seasons at Nordsjaelland where he scored 14 goals in 42 league appearances.

The French club reportedly paid €15m + add ons to Nordsjaelland for the services of the 19-year-old.

The highly-rated winger joins John Mensah (2006) and Asamoah Gyan (2008) as the only Ghanaians to play for Rennais.

“I am very happy to join Stade Rennais FC, a very good French club. The project meets my expectations,” Kamaldeen said after completing his move.

“The Ligue 1 Uber Eats is one of the best leagues in Europe. There is a very good team in Rennes, a lot of talent. I know the club is famous for its training.

“For a young player like me, it is the best choice to progress. I have come to help the team achieve their goals. It is a great challenge to take up,” he added.

The 19-year-old had an impressive campaign in the Danish Superliga last term where he netted 10 goals and provided 8 assists in 29 appearances.

The promising whiz kid is yet to make his competitive bow for Ghana at the senior national team level, the Black Stars albeit featuring in two friendly games for the four-time African champions.