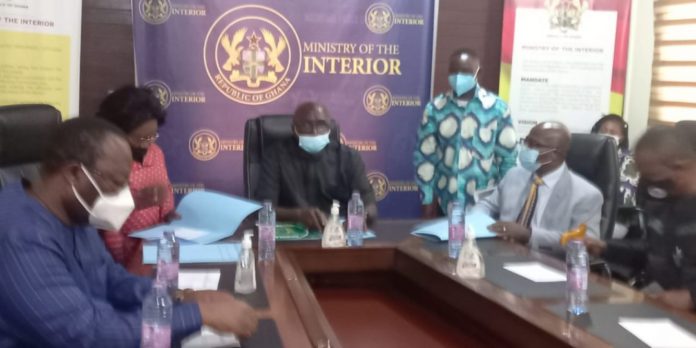 The Justice Kingsley George Koomson-led committee has submitted its report on the riots that marred Ejura to the Interior Minister, Ambrose Dery.

The committee was charged to conduct a Public Inquiry into disturbances that marred the town on Tuesday, June 29, 2021.

The three-member committee was expected to probe, collect and collate the fact on the incidents and make appropriate recommendations.

The Chairman, Justice Koomson, while presenting the report, said they have delivered on their mandate.

He explained they have proferred some recommendations and expressed hope that the government will implement them.

“I want to let you know that we attached serious importance to the work and dedicated ourselves to all issues with meticulous attention and details.

“Having assured ourselves after listening to 22 witnesses and reviewed volumes of documents including audio and videos, we have come with our findings and proffered some recommendations. And we hope the government through your good self [Interior Minister] will give a good ear to them and try to accept and implement them,” he said.

Two persons died with four injured after a military team fired arms during a protest against the killing of a social media activist, Ibrahim Muhammed, popularly known as Kaaka Macho.

About 22 witnesses, including journalists, police, and military officers, traditional rulers, the Ejura Municipal Chief Executive, Bamba Salisu, the Ashanti Regional Minister, Simon Osei-Mensah, as well as families of the victims appeared before the commission to testify.