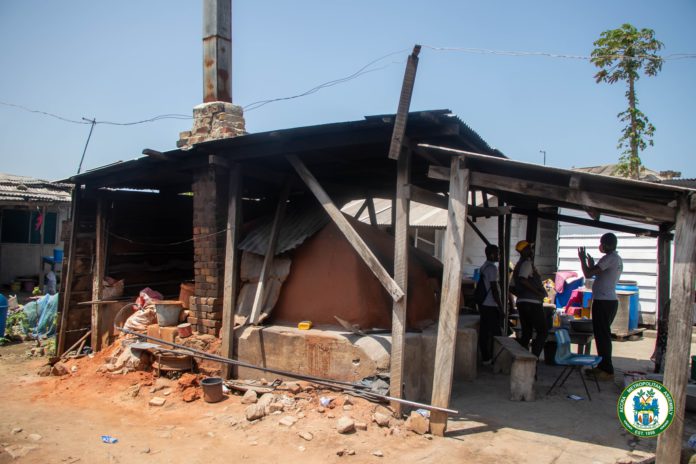 The Accra Metropolitan Assembly (AMA) has ordered the closure of a bread bakery at Jamestown in Accra for not complying with safety regulations and polluting the environment.

This follows an investigation by Public Health Officers of the Assembly and complaints from residents and authorities of the Sacred Heart Technical Institute.

They complained about how smoke emissions from the chimney of a clay oven due to the use of firewood were not just polluting the atmosphere but also endangering the lives of students and staff of the school.

The order was issued on Wednesday when Public Health Officers from the AMA stormed the facility as part of the Joy Clean Ghana enforcement exercise.

The leader of the task force, Mr Asitanga, said the use of firewood was harmful to the students and the residents in the community and advised the owners of the bakery to use clean cooking methods such as gas oven.

“The firewood is harmful to the students and the people in this environment…Stop using firewood and use gas instead if you still want to run your business. I’ll give you an injunction letter and if you defy it all of you will be arrested, halt all your services for now, the health of the students and neighbours are at stake,” he said.

He bemoaned how the smoke from firewood causes increased respiratory symptoms, such as irritation of the respiratory tract, cough or difficulty in breathing.

Others, he said, are a decreased lung function, aggravated asthma, development of chronic bronchitis, irregular heartbeat, non-fatal heart attacks and at worst premature death in people with heart or lung diseases.

“The complex gas emitted contains sulfur oxides, nitrogen oxides, carbon monoxide and potentially carcinogenic compounds which are known to cause cancer, in addition to the notorious CO2 greenhouse,” he added.

The Head of Public Relations, Gilbert Nii Ankrah, said unclean cooking methods were a major source of black carbon; the second-biggest driver of climate change after CO2 and referred to the activities of the baker and other similar activities as an injustice to public health.

He revealed that over 17,000 people die annually in Ghana as a result of using unclean cooking methods, such as the use of charcoal, firewood and cow dung characterised by smoke due to upper respiratory infections caused by solid fuels.

He called on other stakeholders in the industry to stick to standards and work to reduce emissions for a better climate if not for the present one, the future generation to whom “we all owe some kind of legacy.”