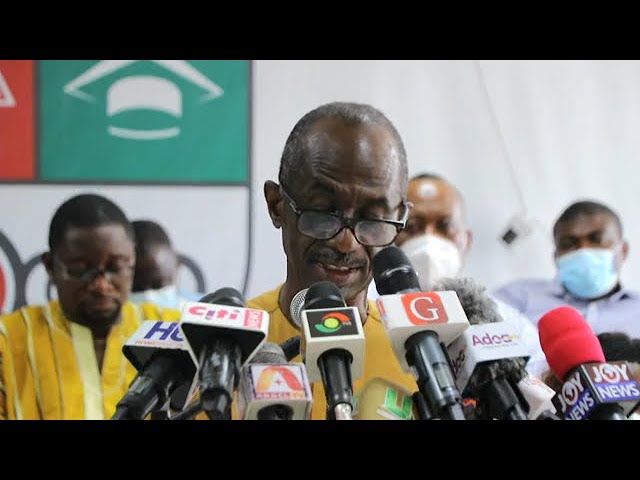 They also want the Chief Justice to step aside whilst the General Legal Council carry out its probe into the issue.

General Secretary of the NDC, Johnson Asiedu Nketia, made this known during a press conference in Accra Tuesday.

He feared lack of transparency in the handling of the allegations would comprise public independence in the judiciary.

“The difficulty, however, with is this is that the investigations would concern the Chief Justice who is the subject of the bribery allegation in this matter and in whom disciplinary authority against judicial officers is vested under section 18 of the Judicial Service Act.

“Therefore, good governance dictates that the Chief Justice steps aside during the pendency of the investigations by the Judicial Service relative to the issue of alleged misconduct on his part, as a Supreme Court Judge,” he stated.

The opposition party, therefore, wants Parliament to compel the President to set up a Commission of Inquiry to ensure transparency and make a faithful determination thereof.

According to Mr Nketia, the party believes that this is the, “only credible and transparent investigation that can establish the truth in this matter. And we hold the opinion that the transparent approach of a public enquiry is the best way to go. This approach, we believe, is in the interest of the Chief Justice who stands accused and his accuser.”

Alternatively, the NDC also wants the Commission on Human Rights and Administrative Justice, which has an enviable reputation of looking into similar cases of alleged corruption against highly placed state and government officials, to take up the role of a public inquiry.

Below is the full statement: